After a fantastic breakfast in The Old Bank, yeap they even had the old vault made some half a hundred years ago, we took a short boat trip to Jasmund National Park north of Sassnitz to see some steep and beautiful chalk cliff’s (see below). I guess we must have been the luckiest guys on the planet this morning because one could not even find a cloud with a microscope and there was so little wind that all the windmills were stopped. The view from the ship today was awesome! 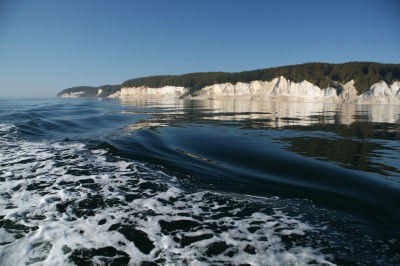 We first started the biking part of today in the afternoon and the first maybe forty kilometres went smooth and quickly on the main road, but the last five kilometres took forever because we were forced to leave the main road for another bicycle route going along the sea and that meant shit quality bicycle roads. The five kilometres turned into maybe twelve kilometres and took around an hour, but on the other hand we found a super spot with a bench for lunch;-) 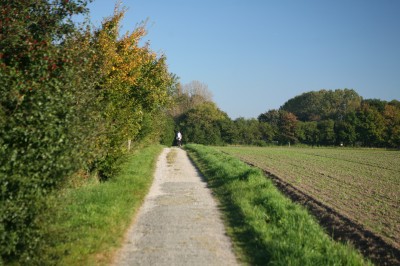 Driving the last kilometres towards Stralsund was a very pleasant experience – the Sun was baking as hard it can in the beginning of October. The spires of the cathedrals in Stralsund were like soft dark shadows above the foggy waters of the Baltic Sea.

Just after crossing the bridge from Rügen to Stralsund the idea about going to the city of Ribnitz was abandoned and we almost immediately found a guest house – a four story building painted in light red with a big banner showing 11,90 EUR per person. As always it was not that cheap, but almost and the quality was good together with the proximity to the old city. We were so close to the Stralsund high bridge that we had to look up on it from our windows:-)