The decision about going to Ustka was made by the weather. Bad weather meant no sea and good weather meant sea, thus Ustka. The weather just could not be more perfect… sun, light tailwind and this all the way to Ustka. Click here for a video of my dad riding his bike outside Słupsk.

We are both surprised that this part of Poland is so hilly; on one of the hills going down into a small town I tried to get my picture taken by the police radar. I am not sure I succeeded, but passing the radar with 54 km/h was at least a qualified try as the speed limit is 50 km/h.

Ustka we realized is a place where a lot of local Polish people go for vacation and for the weekends, at least when it is the high season. The first camping site was closed, the next couple of guest houses and hotels were totally deserted, but after following some more street signs we found Hotel Stach. It also looked a bit deserted but at least the door was not only open, but there was also sitting a girl in the reception. Success.

The embankment was a sight we did not expect – there was an enormous crowd strolling along it. From where all these people come from we are not sure, but probably not from the guest houses, because these were varified to be mostly empty. Going out the mole was nice but I think i will just let the pictures speak for themselves: 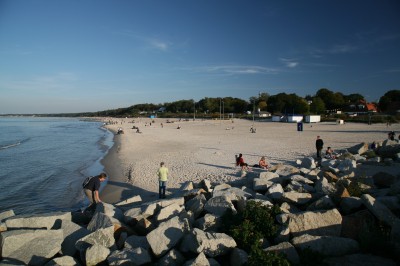 As crowded the embankment was in the late afternoon as deserted was it in the evening when we went there for dinner. Not even a black cat was crossing our in front of our eyes.

Tomorrow we will direct our bikes in the direction of Koszalin.