Today we stepped up to the big chainwheel since we came under heavy artillery fire from the Russian Army just outside the small village of Prudy some thirty kilometres from Kaliningrad. For some this might sound like a joke for other the beginning of the Third World War, however correctly said we heard artillery fire from what we think was a military exercise area. It must have been so damn crap to be soldier during the Second World War.

As with yesterday we basically flew the first sixty kilometres from our starting point only bothered by truck traffic and the odour of car exhaust – which are far worse in Russia than in the EU, probably something to do with low diesel and gasoline quality. The result of this was that we left the main highway (see below) near Znamensk for a much smaller road on the south side of the Pregolya river. 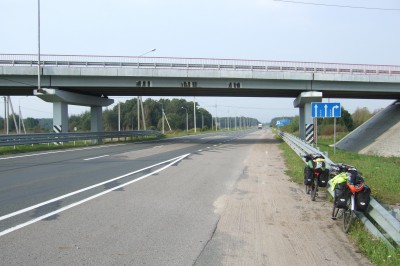 This ended up being a nice choice; the road was good and much (!) less trafficked that the highway and in addition the nature was more interesting with a lot of abandoned farmland around us. We even drove by an unpleasant looking prison. 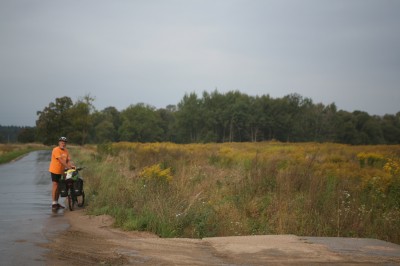 Before arriving to Hotel Kaliningrad we somehow expected a centre of (rebuilt) old buildings. We were therefore really astonished to learn that most of the centre was one big Soviet post-war rebuild – and worst of all most streets and buildings were in decay, with the biggest and ugliest of all the buildings being the abandoned Palace of the Soviets situated in the extreme centre.

To make things better we enjoyed a nice meal at a bar with the peculiar name Pirate House:-) Tomorrow we will take a close look at the city since we will have a non-biking day. I guess the city will look better when it is sunny:-)