We left the Dzǖkija Hotel after a group photo with bicycles in front of the hotel now Kenneth was at hand as a photographer (see below). This morning was probably the coldest we have experienced so far and just after we left we also got a few showers. 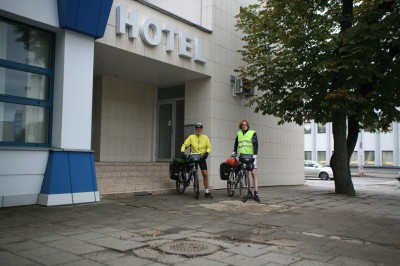 We drove from Alytus to Vilkaviškis via Krosna and Marijampolé. The terrain until around five kilometres before Marijampolé was quite hilly until the landscape changed into flat farmland the remaining way to Vilkaviškis. My hope was to eat lunch at a café in Marijampolé, but the dream burst since they were renovating some parts of the road from Krosno which diverted us on to smaller and sometimes even gravel roads. This made us hungry long before Marijampolé and we thus stopped and ate lunch at a bus stop.

Soon after two local ladies and a guy came to the bus stop and looked quite puzzled about my bicycle. When I came closer they asked me something in Lithuanian – I replied in English which they did not understand a word of. We found common language in Russia and they were laughing a lot when they heard we were on way to Denmark by bicycle. As one of them said; ”She could not even go to the nearest city by bicycle”. Could have been fun if they also met the Dutch girl I met later at our hotel in Vilkaviškis – she was on her way by bicycle from Norway to Holland. What she was doing in Vilkaviškis puzzled me after we wished each other a nice trip. 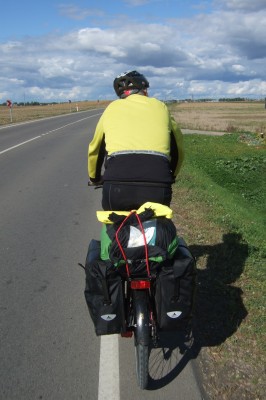 Marijampolé really astonished us a lot, since everything was newly renovated or built; the main square, the biggest hotel, the police station (and the twenty cars on the parking lot were brand new) and the roads. The city like rest of Lithuania does not look like the Eastern Europe twenty years ago. 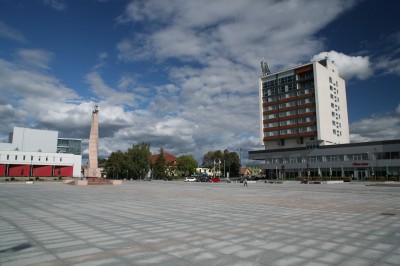 Vilkaviškis surprised us even more, since this small city with only thirteen thousand inhabitants had a lot of cafés and restaurants and more interestingly a bowling centre. All the restaurants (minimum 3 restaurants) were busy catering for banquets, so we were forced to dine in the local bowling centre. The food there was very good and inexpensive and the entertainment superb, since the ”whole” city gathered it seemed to us for watching the basketball match between Lithuania and Greece.

Who won I do not know, but I know that we felt like winners today.