Today became the longest leg so far both in total and on gravel roads (9 kilometres) and the wettest, since we unfortunately got our first rain the first twenty kilometres toward the Lithuanian border. Fortunately it was only a few showers and in the end we got a lot of sunshine while driving through the pine forests in Lithuania towards Ignalina. 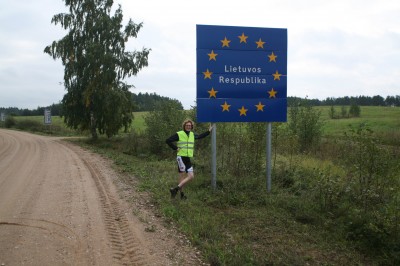 We crossed the border from Latvia to Lithuania (see above) only two kilometres from the Belarussian border so it would not be wrong to say that we were cornered. The reason for this is my addiction to strange tourists destinations; the Ignalina Nuclear Power Plant. 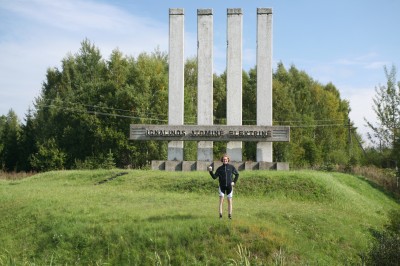 For those who are not familiar to nuclear power I will just sum up the important history of the Ignalina plant. It is of the same (unsafe) type as the Chernobyl reactor which blew up in Ukraine, the Ignalina version is just bigger by capacity and newer. The last reactor on the Ignalina plant was shut down on the 31.12.2009 as per agreement with the European Union, which did not like the safety issues regarding this particular reactor design. Currently the plants around two thousand employees are working to dismantle the plant and safely store the spent nuclear fuel.

From the outside and the surroundings everything reminded me of Chernobyl even though I have never sat my foot there. The reactor building design (see below) although a bit different reminded me of the pictures taken by helicopter short after the Chernobyl accident – it somehow gave me the shivers and yet again I knew the plant was taken out of operation but still not a toy. 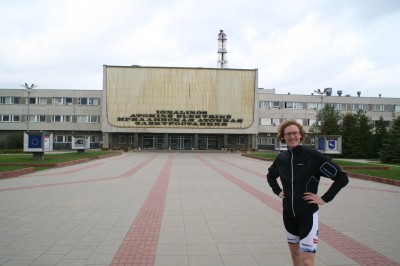 We got the photographs and we hurried further towards the city of Visaginas, the Ignalina plant’s Pripyat, just ten kilometres away. Visaginas proved to be an interesting short visit since it was built totally from the ground together with the nuclear power plant, thus it was like going into a museum of the Soviet paradise and city planning. The city was indeed well-structured with a lot of pine trees around but with a total lack of family houses; only apartment buildings were to be seen.

Our final goal was the city of Ignalina some 36 kilometres south of Visaginas. I forgot to add 36 kilometres of pine forest with almost no human in sight and even the sign showing ”Ignalina 3 km” was kind of a joke, since it just turned right into more pine forest. Honestly speaking I began to doubt there would be a city of six and half thousand inhabitants. 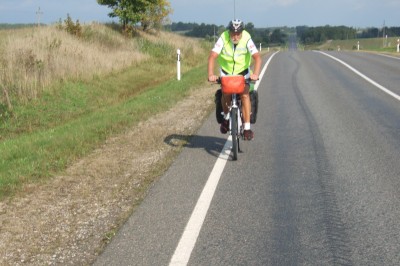 At the last kilometre we found a very nice, clean and well-maintained city and even better a small three star hotel Žuvėdra overlooking a small lake. Here it is very important to add that the food and service in their restaurant was splendid (and very inexpensive).

Tomorrow there will be no horror-tourism, but instead we will have some 110 kilometres ahead of us to reach Lithuania’s capital.