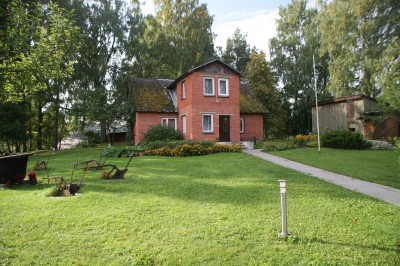 We left the guesthouse (see above) near Ape late at around 10.30 since we had to wait for the morning fog to clear or to be more correct; because I was kind of slow:-) The 24 kilometre trip to Alūksne was near-perfect; the Sun was shinning, we had back-wind and my problems with my left leg was basically gone. Only the road could have been better paved, however the surrounding nature clearly compensated for that – great hilly nature here;-) 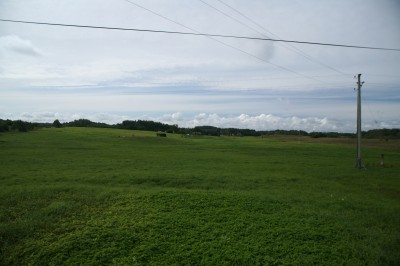 In Alūksne we found the local Tourist Information, which did neither have a map of the west part of Latvia or the whole part of Latvia, however the guy working there was very friendly and pointed towards a bookstore where we subsequently found the map. The guy also told us that Alūksne had Europe’s only Bible museum and pointed to the other part of the Tourist Information – a building approximately the size of a two 20” shipping containers (however much nicer). He was by the way also very interested in languages and told me that Latvian and Lithuanian can be traced back to Sanskrit, which is or was spoken in India (do not know much about it).

After chewing a bit on the language information we checked in to the café Pajumte for some tonics, beer and some local food, which was very tasty by the way. Next and final stop for today was the city of Balvi and the around 40 kilometres to there went as smoothly as coming to Alūksne. The only difference was that more nature was changed into farmland and that the terrain levelled out. 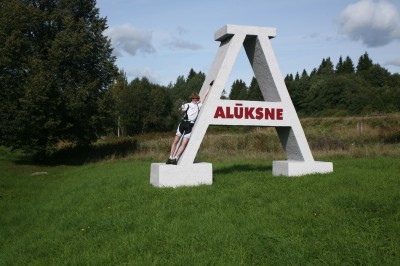 Note about the above picture: A could also be for “Anders”:-)

Upon reaching Balvi we almost biked through the city before realizing that finding a hotel was maybe more difficult than first imagined. I asked a random guy working on putting a fence up. First he could not understand why we did not want to continue further, the time was only around 16.30, it was still so early, however we wanted to relax. He did not want to tell us where the hotel was, he jumped into his minivan and showed us where the hotel was. We thanked him and stood a bit puzzled when he drove away again; damn such things just never happens at home (in Denmark I mean).

The hotel was upgraded-USSR. I asked the lady who was watching Russian television whether she spoke English or Russian; after a minute of thought from her side she said Russian would do. Next step; any available rooms. Yes. She showed me a room for 25 lats – nicely renovated. I said that would do and anyway asked whether they had anything more basic (= cheaper). No, those rooms where already taken. While walking down the stairs she said suddenly that they actually had a cheaper room for 20 lats. The difference was that that one was only half-upgraded from the USSR-style but it was a total bargain and took it. The bargain later became even better after I realized that the rooms had free WIFI. 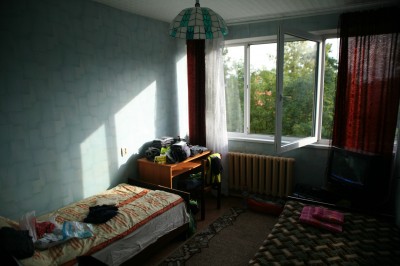 After walking through most of the city in search of a restaurant we ended up eating some pizzas together with the local teenagers at a local pizzeria.

Tomorrow our goal is Rēzekne some 80 kilometres to the South. We wish ourselves good luck;-)