It was kind of symbolic that we managed to cross the border between former East and West Germany on the anniversary day of their reunification some 21 years ago. We were only sad that on our chosen road from Wismar to Lübeck there was no trace of the old border any more, or at least, we could not find it (below is my best guess of the approximate location). What we did see was a lot of motorbikes and also a few Trabant’s – damn it is good the production of this disaster-car has ended. 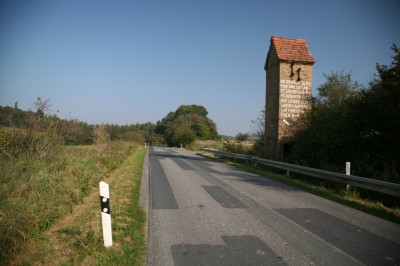 We did not see much of Lübeck since our goal was a lot further or if you ask my dad – because the bicycle lanes in Lübeck were of such an uneven and poor quality that we were looking down all the time. Honestly speaking he was right and not only about Lübeck, but it goes for many parts of Germany and Poland so far. In places where the bicycle lanes goes onto the sidewalk there is often a raised edge of around five to ten millimetres which is exchanged with a bump. Doing twenty or so bumps per kilometre then you begin hating these in-city bicycle lanes.

For many days I have felt that it is important to thank all the nice Germans we have met for their help and friendly attitude. This is not to say that all the people we have met in all the other countries we have been through have not been nice; because indeed they have. Still I think Germans tend to be extra helpful in many situations. Let me take two examples.

We were standing just on the Rügen side of the Rügen Bridge with our big road map unfolded trying to figure out where to go. An elderly couple driving their bicycles far behind us stopped immediately when they saw us and the husband (I guess) began recommending the best and least trafficked roads.

In another example we were driving in an deserted industrial area when I dropped my bicycle jersey without taking any notice since it was fastened to my luggage carrier. A car passing by slowed down to our speed and the guy on the passenger seat opened his window, put his head out and spoke out load that I lost something further back.

Such nice behaviour seems to be the standard in the part of Germany we have been biking in. I wish I could say the same about my fellow Danish citizens, which I cannot:-( Let it be a reminder to myself as well!

To summarize today’s leg; one hundred kilometre of cultivated farmland and ten kilometre of city presented in good weather. Oh one word more we probably found the oldest hotel in Plön totally run down although with a lake view. My guess is that this hotel will be gone in ten years time. 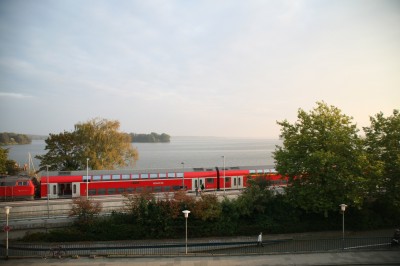