In continuation of the yesterday’s de-tour we again did it; drove down a road until it was blocked by a military installation. This time it happened near Mrzeżyno where we had hoped we could take the more direct road to Rewal, instead we ended up driving four kilometres on paving stone to the check-point and back again. ”Happy New Year” as one of my colleagues would have said?! Why the heck is the military areas not shown on the maps here in Poland or they could at least have omitted the roads totally to avoid confusion.

Apart from the above we had marvellous weather and since a great part of today’s road was very close to the touristy Baltic Sea we had a chance to enjoy our lunch on some logs directly on the beach – could it be more wonderful? 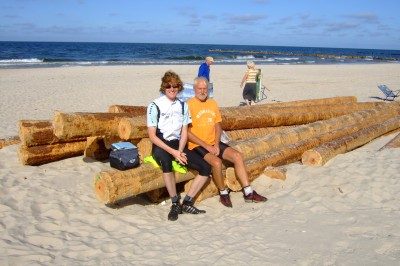 It was very clear that our destination Rewal must be a lively city in the summer season – however today on the 27th September the streets and squares where empty. Most shops and guest houses were closed and the few open grocery shops had unplugged their fridges with beer to save power (thus no cold beer to be bought). With this in mind it was a big laugh when I checked one of the more prominent hotels; they still claimed the price for the high season. Our third try was up (down) to our standards and we thus checked into Dom Wczasowy Idylla on Saperska 16 where we were greeted by a friendly lady. The house itself was an old nicely renovated building from before the Second World War with stairs squeaking when walking on them – perfect!

And I even did not mention the nice service in the local restaurant California in which live music was performed even though there were no guests (almost). 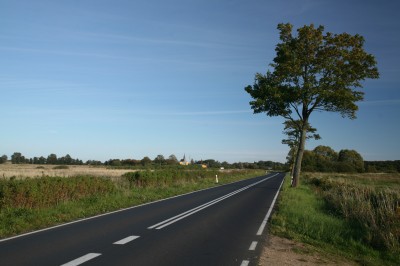