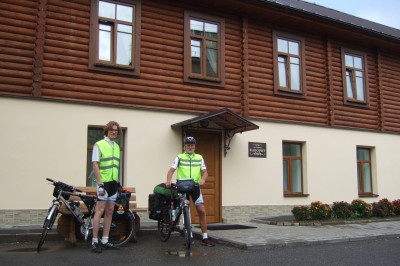 Oh well it would have been a walk in the park if my left-leg pain did not strike back again around seven kilometres from home base (Pskov, see the picture above). Incidents seldom come alone and after resting my leg while announcing some key Danish words for dissatisfaction we continued. One more kilometre further down the road the police was jumping around measuring some distances between a badly damaged Russian Volga and a Renault with a big blow to its back. Luckily it did not look like any like anybody was injured.

At mark 8 km on my bicycle computer it malfunctioned and turned off. If my temper was not cooking before it was now (I bought a new battery just a few weeks before). Some readjustment of the battery seemed to solve the issue. Some guys here will probably ask why a bicycle computer reset can prove annoying, but it goes down to simple monkey business; I want to know how far I have biked and thus how cool I am:-)

The road out of Pskov was superb the asphalt was as if it was rolled on to the ground yesterday and the heavy traffic declined sharply around 10 kilometres after Pskov. This could not be said about the last 10 – 15 kilometres before the border here pot holes were the norm, however to give the authorities credit, the road was actually being upgraded with new asphalt.

At the Russian border post (see picture below) we jumped the queue or rather we did not consider joining the car queue and went directly to the border. We were waiting for ages (at least according to my dad) for her to process our passports and she even said that there was a spelling mistake in my dad’s passport, but no worries she would fix it. ”She would fix it” I thought for a moment until I came to the conclusion that my dad is pretty lucky he even entered Russia – normally such ”small” mistakes cannot just be fixed here. The Russian Embassy in Denmark had ”only” made two spelling mistakes in the transliteration from Danish. 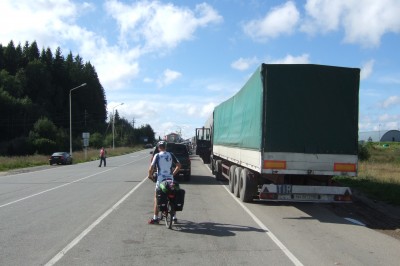 We entered Estonia while we enjoyed the hot rays from the sun from an half overcast sky and even my left leg was not giving any problems any more. After stocking up on food in the nearby bigger town Vastseliina (or as my dad said Vaseline for simplicity) we understood that this was a very good idea as we ended up driving five kilometres on a gravel road into rural Estonia. Our destination was a nature resort called Piusa Ürgoru puhkemaja which according to their website can accommodate 77 people.

What we found was a collection of incredible nice and well maintained cottages near a small river surrounded by forest and hills (see the picture below). A great place for nature lovers and us! For ten minutes I was walking around looking into windows, knocking on doors and windows, but there was just nobody to be found. At last I found somebody in the kitchen of the dinning building. She did not really speak English but luckily she understood some Russian. 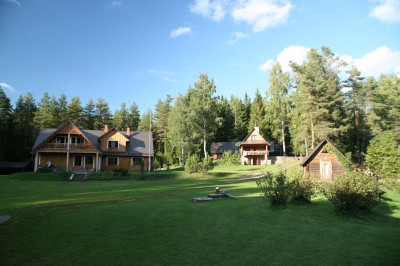 She showed us our room and the bathroom in the corridor, everything was remarkable clean and empty – thus I asked; ”are we the only ones here”. ”Yes, it is the end of the season” she said. Wow.

The only thing we are sure about tomorrow is that we will avoid gravel roads and go south.