Day one is always special and this Monday equally as much. I woke remarkable early at eight in the morning and we immediately began preparing for todays trip from Slantsy to the holiday resort Chudskoe Podvore in Spitsino some 70 km to the south of Slantsy.

After driving my car to site and taking care of some few final issues at work I got back a bit late to the hotel. My dad was already relaxing in the sun – the weather looked to be fantastic, no rain and almost no clouds to see anyware and a bit chilly but on the other hand not cold.

I spent a bit more than 22 months at Hotel Kirovskaya so I kindly asked the receptionist and all the cleaning ladies for a group photo both inside and outside the hotel. The nice receptionist also kindly asked me to write in their guestbook which in fact is not a guestbook but a book which every hotel and store should have by law; for complaints and suggestions, however I could and would only write nice things. 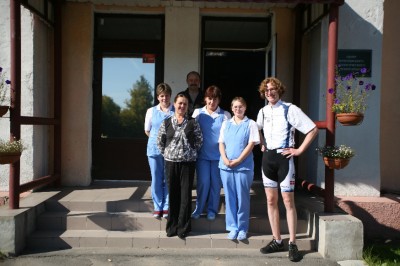 A final photo (see above) and we hit the road towards the new cement plant only seven kilometers from the hotel. This was actually the first timed I was trying out the two new side bags and handle bar bag for my bicycle. The good news was that all my stuff could fit and the handle bar bag did not make problems controlling the bike.

At site we gathered the colleagues which at that time was in the office for a group photo outside on the parking lot. I wished my colleagues good luck with the plant and they with our trip – my guess is that we both need the luck. We drove off to an anstonished grin on the face of the security guard controlling the check-point – two cyclists with a lot of bagage is not the standard around here. 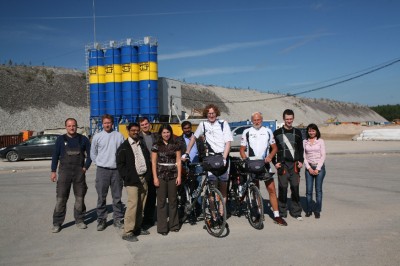 After some steady pace and examples of Russia’s worst roads we finally reached Gdov some twenty kilometers before of final destination. Here we stopped by a grocery store to stock up on water and food (the restaurant at the holiday resort sucks big time). In front of the store a lady geting ready to bike away on her foldable bike asked from where we came and to where we are heading. Slantsy – Esbjerg (in Denmark) I said. I do not think she understood or heard the Denmark thing, since she continued asking whether I was local, which I guess is a appreciation of my good Russian?!? In the end I underlined that we were going to Denmark, and she wished us a good trip in astonishment and drove off. We shortly did the same.

The next twenty kilometers were a bit hard. I had some light pain in my knee shell on my right leg and my dad was complaining about a painful ass.

We reached Spittseno and immediately bought ourselves to cold cans of beer to celebrate. The first kilometers where driven without any problems or disasters. The holiday resort turned out to have kept the poor level of service of last year. In the showers the cold water was fluctuating so severely that often no cold water was present. And could we lock the door to the hut, no of course not, the lock was fucked up.

Russian service when it is normal unfortunately.

Take care og see you on the road. 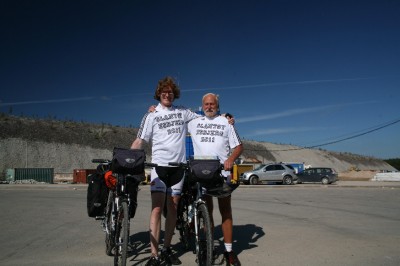